William Loman has served for over fifteen years advising private and public sector companies on a broad range of corporate matters with extensive experience in matters regarding business transactions, mergers and acquisitions, and corporate finance and securities. He has worked with Catalist as its General Counsel since 2006.

Prior to joining Catalist, Mr. Loman served as Associate General Counsel for the industry-leading, information technology and management consulting company, BearingPoint, Inc., where he played a key role in the execution of multi-million dollar, transactional agreements with the company’s largest commercial clients, as well as the development and implementation of risk mitigation strategies and dispute avoidance. Prior to BearingPoint, Mr. Loman held key positions in the General Counsel office at Acterna Corporation and DoubleClick, and was a Corporate Associate at the law firm of Bryan Cave in New York.

Mr. Loman served with distinction in the United States Marine Corps Division of the Judge Advocate General Corps and earned his Juris Doctorate from the University of Virginia School of Law and a B.A. degree in Sociology/Political Science from Howard University, with high honors. Mr. Loman is a member of the New York State Bar, New York State Bar Association and American Bar Association. 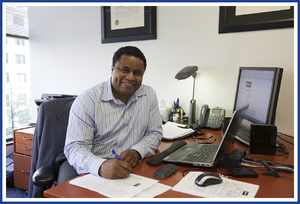