Abortion rights advocates won a significant victory in Kansas on Tuesday with voters overwhelmingly rejecting an anti-choice constitutional amendment 59 to 41 percent. The election saw remarkably high turnout among Democratic voters, a significant number of Republicans and independents voting for the pro-choice side, and a notable spike in voter registration among women and Democrats, mirroring trends in other states with competitive races. The outcome in Kansas also underscored how ballot initiatives can defy polling and scramble normal partisan voting patterns.

If Republicans and anti-choice organizations were hoping that they’d secured an advantage by scheduling an anti-choice ballot initiative during an August primary instead of a typically higher-engagement November general election, Tuesday night proved them very wrong. In a Republican-leaning state which voted for Donald Trump by 15 points in 2020, Democrats helped defeat the initiative by turning out in record numbers for a midterm-year primary election, voting at levels more commonly seen in a general election than a primary.

Although votes are still being counted, it appears that the Democratic turnout in 2022 was around 57%.1The percentage is the number of Democratic primary votes divided by the number of Democratic registrants based on unofficial election night returns last updated August 5 and registered voters from July 2022 as reported by the Kansas Secretary of State. In Kansas, only Democratic voters can cast ballots in a Democratic primary, but unaffiliated voters can register with a party and cast a primary ballot. When Kansas election administrators update their data post-election, the calculated turnout rate may drop, reflecting the same number of votes divided by a larger number of Democratic registrants, including new registrants. For context, in the 2018 primary, which also featured a contested election for the gubernatorial race on the Democratic side, Democratic turnout was just 36%. At 57%, Democratic turnout in the 2022 election even eclipsed Democratic turnout in the 2014 midterm general election and approached the 65% turnout Democrats enjoyed in the 2018 midterm general. These trends can be seen on the left hand side of Figure 1, which plots the Democratic turnout rate for recent primary and general elections in Kansas.2These turnout estimates come from Catalist files archived after each election; some deviations from the official numbers are possible, especially for historical primaries. While no one can say for sure what this means for turnout in November, it clearly shows that Democrats are engaged and the relatively higher turnout that we have continued to see since the 2016 election shows no signs of abating.

It is worth noting that the Democratic primary for U.S. Senate was competitive this year, while the Republican primary was not, with incumbent Jerry Moran easily winning the Republican nomination. Competitive primaries are associated with increased turnout, which may contribute to part of the Democratic advantage. However, turnout was incredibly high, at 48%3This is based on unofficial election night returns last updated August 5 and registered voters from July 2022 as reported by the Kansas Secretary of State. overall, much higher than historical primaries in Kansas, suggesting that the abortion initiative was the driving factor in Tuesday night's turnout. Further, the 2020 primary featured a competitive Democratic presidential primary while Donald Trump was the unopposed incumbent Republican, but that election still featured a 9-point Republican turnout advantage. When Kansas Republicans placed this amendment on the ballot for August, they didn’t anticipate the backlash they’d see from Democratic voters as well as many independents and even some Republicans. 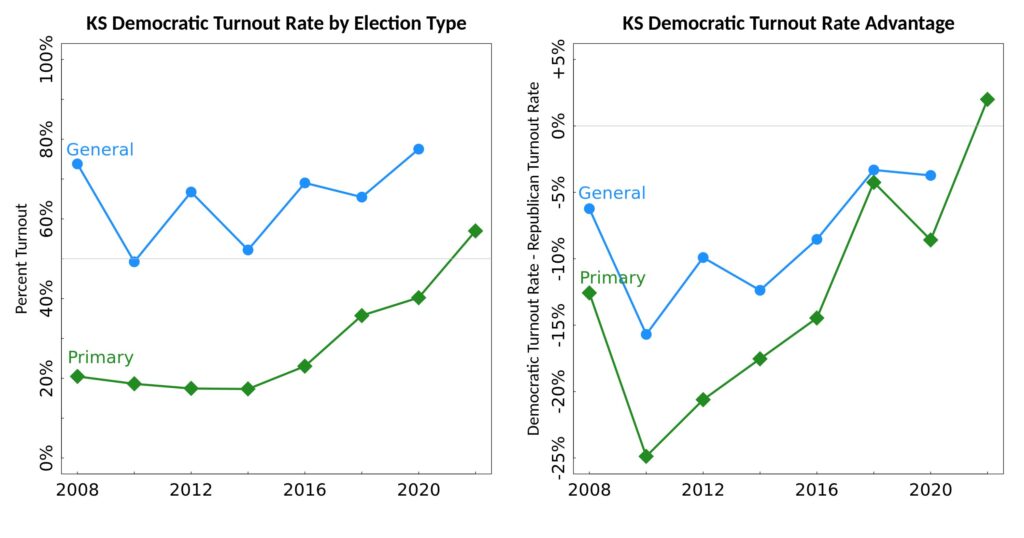 That said, Republicans still have long a significant registration advantage in Kansas — 852,000 Republicans compared to 496,000 Democrats and 583,000 independents in 2022.4These numbers are from July 2022 as reported by the Kansas Secretary of State. Independents are the sum of unaffiliated and Libertarians. Overall, about 60% of primary ballots cast were in the Republican primary, with Democrats comprising the other 40% and independents voting on the ballot referendum, but not for any partisan candidates.

The anti-choice ballot initiative in Kansas actually predated Dobbs, with the Kansas State Legislature voting to place it on the August ballot in January 2021. Looking at the voter registration data, however, there is some evidence that the Supreme Court’s decision to strike down abortion protections in Dobbs was directly responsible for at least some of the increased engagement on this issue. We can see this clearly when examining patterns of voter registration by gender, which are displayed on the top left of Figure 2. This chart shows the percent of new registrants per day in Kansas who are women.5 Many states allow voters to voluntarily provide gender data on voter registration forms or through automatic registration processes, such as ones linked to obtaining a drivers license. Women comprise a majority of the electorate — 53 to 55 percent in elections going back to 2008 — due to higher voter registration and turnout rates as well as greater longevity. Some states are starting to integrate non-binary gender designations in official data, but these are not yet prevalent in voter files. While this figure is normally close to 50%, beginning with the leaked draft of the Dobbs decision in May, women have been registering to vote at higher rates than men. 6 These data are consistent with findings from TargetSmart. Kansas is one of many states that collect gender data as part of voter registration. In states that don’t collect such data, voter files rely on commercial data and modeling to estimate gender. As always, we encourage readers to compare multiple sources of data and analysis on elections. Although this does level out somewhat as we get further away from the decision, it has still not returned to the pre-Dobbs equilibrium.

Importantly, this is not just a Kansas phenomenon. Although the trend in Kansas is much steeper, likely owing to the immediate salience of the ballot measure, we see a similar pattern when we look at these numbers among other states with competitive Senate elections scheduled for 2022, as seen in Figure 2. These are, by necessity, limited to states where Catalist has acquired a new public file from state election administrators at least two weeks post-Dobbs. In each of these states, with the exception of North Carolina, new registrants were much more tilted towards women post-Dobbs. As a check to make sure women are not just more likely to register over the summer, we also looked at historical data from 2018 and found no similar pattern. Nationally, new registrants in 2018 were overall slightly more likely to be women, but this relationship was constant from January through July.

We also looked at other states without competitive Senate races, where we have recently acquired updated voter files, and found they did not show the same spike of women registering post-Dobbs that we see in the more competitive states. This suggests that individuals are activated more acutely when they believe in the efficacy of their vote and, relatedly, when high-profile campaigns remind them to exercise their rights.

Figure 2: Percent of Daily New Registrants who are Women7Trend lines are shown for days that included more than 1% of registrations for the time period to avoid over-representing short-term swings during days with very limited updates to voter files. 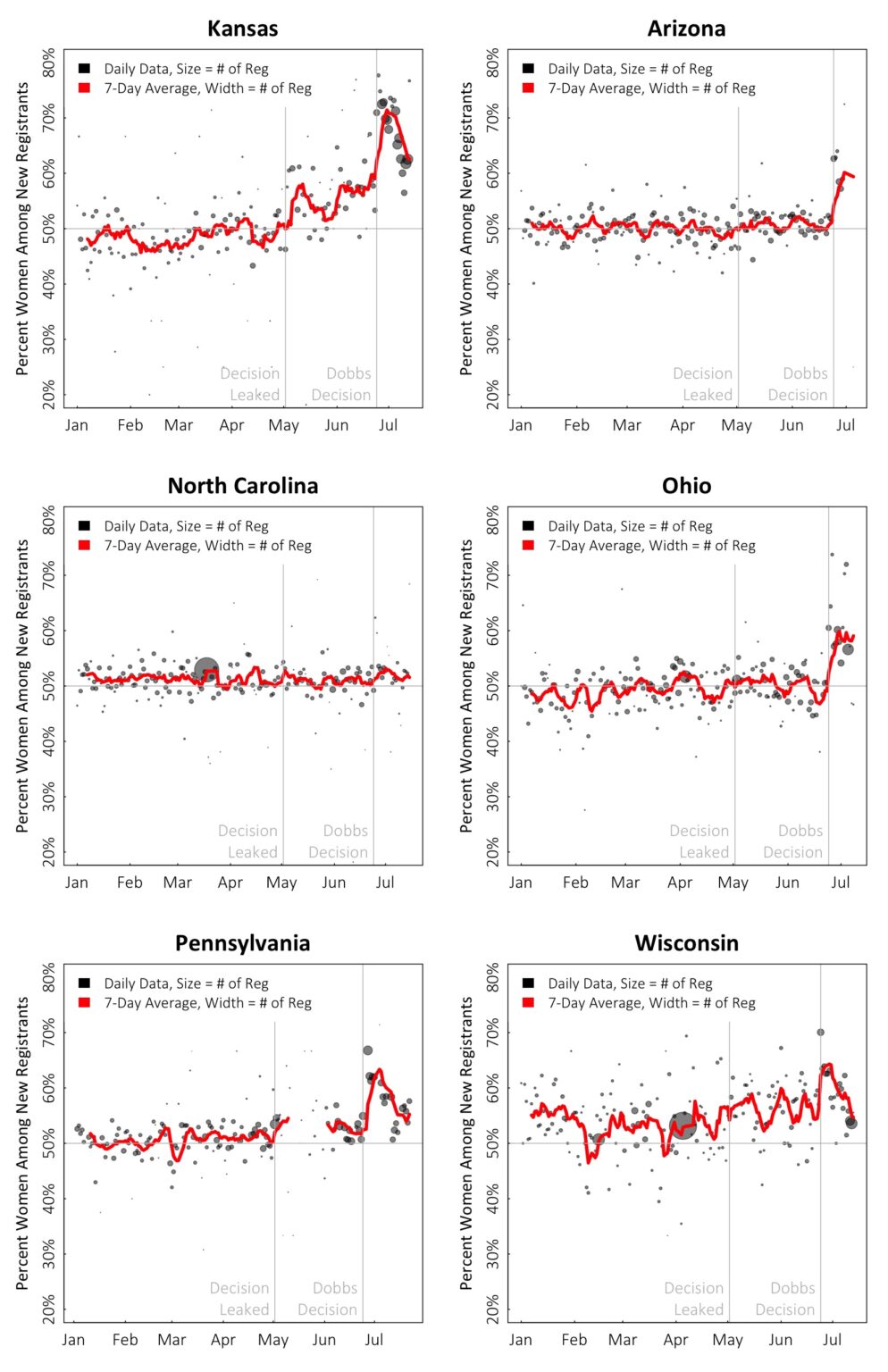 New registrations in these states since the Dobbs decision have also leaned toward Democrats, who are much more likley to hold pro-choice views than registered Republicans. While the role of women and all people who can become pregnant are front-and-center in the abortion debate, public views on abortion remain far more split along partisan rather than gender-based lines. In other words, Republican women tend to have anti-choice views while Democratic men tend to have pro-choice views. Therefore, a spike in voter registration among women does not necessarily guarantee a spike in pro-choice voters, especially in a conservative-leaning state like Kansas where Republican women outnumber Democratic women or Democratic men.

When we look at registration trends by party in Figure 3, limited to the subset of states we examined earlier and where voters are allowed to register with a political party, we do in fact find that new registrations leaned Democratic as well. In Kansas, this trend started immediately after the draft Supreme Court opinion was leaked in May but peaked following the release of the final opinion in June, when public attention on the decision was even higher. Remarkably, for a traditionally Republican state like Kansas, a majority of the daily new registrants immediately following the decision were Democrats. We see some versions of this trend in most of the other Senate states as well, although North Carolina continues to be an exception. In Arizona the bump for Democrats is not as evident after the leak, but does show up following the final decision.

Figure 3: Percent of Daily New Registrants Who are Democrats8Trend lines are shown for days that included more than 1% of registrations for the time period to avoid over-representing short-term swings during days with very limited updates to voter files. 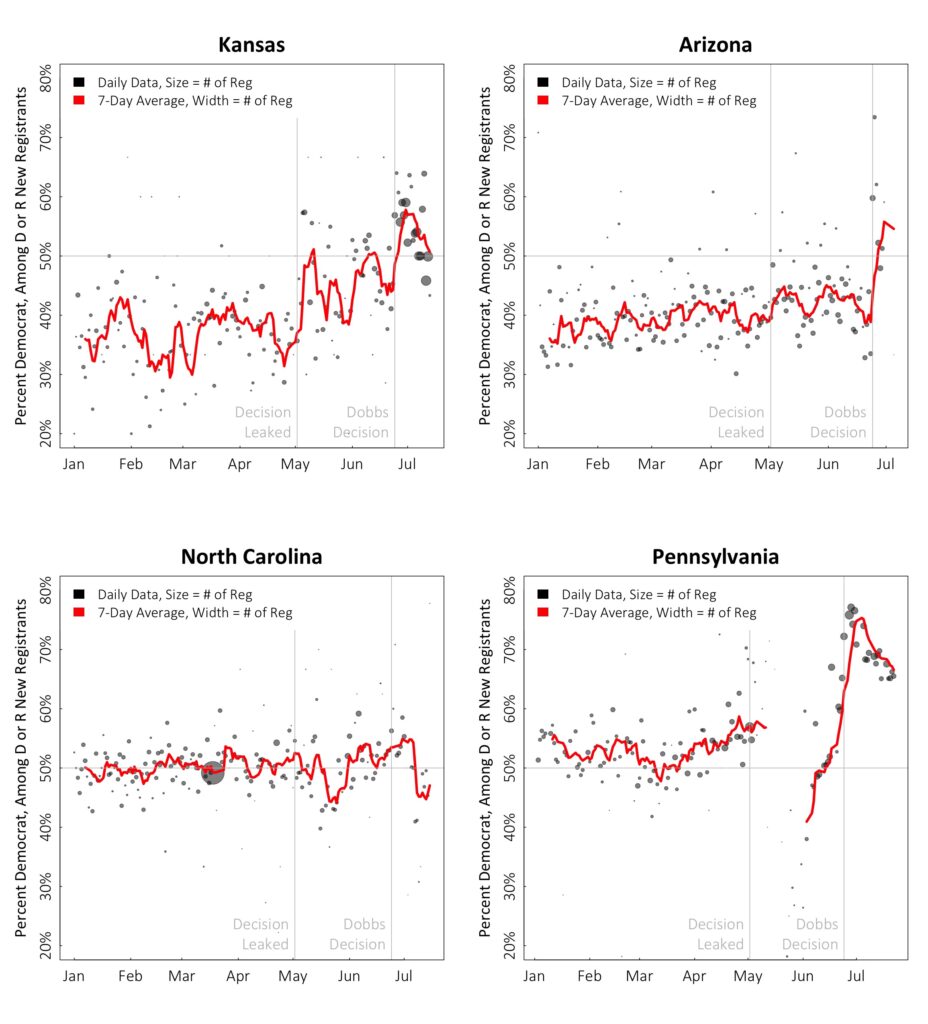 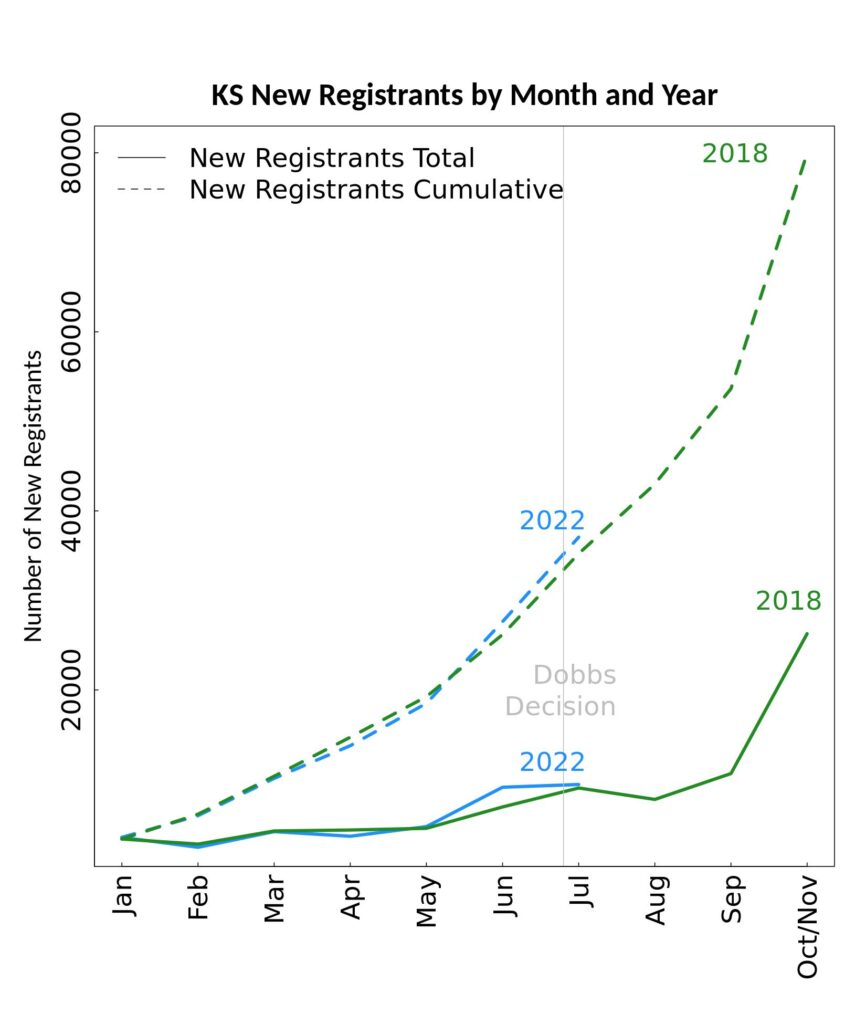 Although we believe the aforementioned patterns in turnout and registration trends can partially explain the surprising results in Kansas, we do not think they tell the full story either. This election didn’t match the usual partisan voting patterns because voters were being asked to weigh in directly on a policy issue rather than to choose between two candidates from the major parties.

In this case, turnout numbers by party registration and final vote results allow analysts to deduce that at least 20% of registered Republican voters must have cast ballots for the pro-choice position, despite identifying with a party that is hostile to this position.  Because of this split by Republican voters on this issue, the New York Times estimates that anti-choice amendments like the one in Kansas would fail in 40 out of the 50 states if they were placed on the ballot.

Additionally, ballot initiatives that focus on issues where public opinion is lopsided in a liberal or conservative direction tend to underperform their public polling at the ballot box. This may be due to status quo bias among some voters, who are less likely to directly vote for any significant changes to the law. Jonathan Robinson, Catalist’s Director of Research, and academic partners, in conjunction with Data for Progress, conducted a recent survey experiment which found that emphasizing a shift in the status quo could move public opinion against a public policy proposal by 6 to 7 points — a pattern that can be even larger when comparing generic issue polling results and ballot initiative results in states.

In overturning Roe, the Republican-appointed majority on the Supreme Court destroyed a decades-long precedent. In the wake of the Dobbs decision, abortion rights advocates have reported dramatically increased engagment among their constituents and the generic Congressional ballot has continued to move toward Democrats. The degree to which that will benefit Democrats in November will depend on how salient the issue remains nationally and in specific races. Our analysis suggests that at least immediately following the decision, this issue was fairly salient in states with competitive Senate races, enough to drive increased registration among women and Democrats in most of these states.