What Happened in the CA-25 Congressional Election? (2018)

Howard “Buck” McKeon represented the 25th district in California from 1992–2013, winning handily even in environments otherwise favorable to Democrats such as 2008. 2012 exposed the first potential sign of weakness, when McKeon won re-election by 10 points but Romney only narrowly carried the district by just 2 points. This 8 point difference between McKeon and Romney was actually a slight underperformance by McKeon (or overperformance by Romney, if you like) as McKeon averaged a vote share 17 points higher than Republican statewide candidates in the district. Given Romney’s performance in the district and how daunting McKeon’s incumbency advantage appeared to be, when McKeon announced his retirement prior to the 2014 congressional election it looked like a prime pickup opportunity for Democrats.

The DCCC subsequently flagged CA-25 as an “Emerging Race” in 2014, however the California top-two primary system led to an unfortunate result in that Democrats were locked out of the general election, and this seemingly-promising open seat was secured by Republican Steve Knight.

The district was once again added to the Red to Blue list in 2016 when Democrat Bryan Caforio cleared the primary to face incumbent Knight, only to subsequently lose in the general election by 6 percentage points (53 percent to 47 percent). Clinton, however, won the district with a 7 point margin — a 13 point overperformance by the incumbent compared to the top of the ticket race.

That made the district a prime pickup opportunity with the prevailing winds blowing in the direction of the Democrats in 2018, and indeed Democrat Katie Hill defeated two-term incumbent Steve Knight by an 8 percentage point margin.

All of the above history of this district leads to some interesting questions:1Note that another interesting question would be how this election compared to 2014 and other previous midterms, but these are not answerable because, respectively, 2014 was contested by two Republicans and the impact on the district lines by the 2008 “Voters FIRST Act” was fairly extreme (the district used to stretch from northern LA county all the way up the extremely rural eastern California border nearly to Sacramento, and now contains more of northern LA county and the city of Santa Clarita).

Before we address what’s unique about CA-25, it’s worth noting that this district is not showing some of the patterns we have seen in other analyses.

For example, differential performance across different types of communities (the district is mainly suburban, but also has rural and urban areas) didn’t really play a role. We see this below in three graphs, showing democratic margin in specific election outcomes on the left two panels and the difference between two elections on the right panel, by how the lines closely track each other and essentially shift up or down but the overall shape remains stable:

And there were few differences when looking at the past partisan performance of precincts between 2016 and 2018 as well — that is, Hill didn’t really improve or lose ground compared to Clinton as a function of partisan behavior in the district. In the graph on the left we see almost identical performance between Clinton and Hill across precincts and in the graph on the right we see a very minor improvement for Hill among the 50/50 precincts, but Hill and Clinton performed essentially the same among highly Democratic or highly Republican areas of the district: 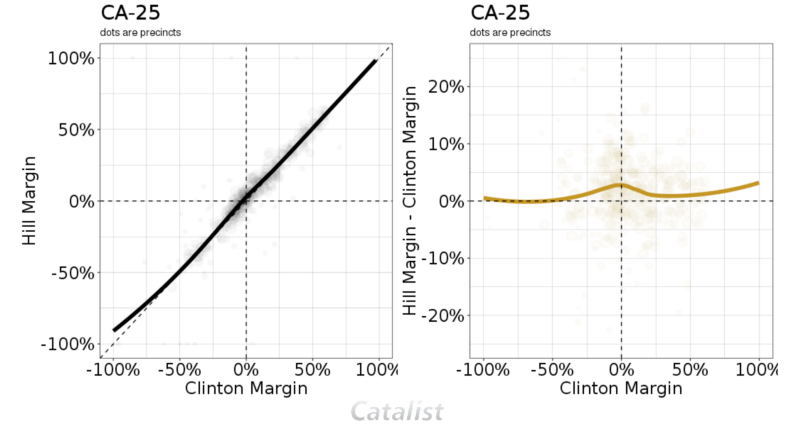 Given that, it makes sense to look at 2012 as well, where we see Hill showing an improvement over Obama performance, but it is a fairly uniform shift up. Looking at this another way on the right, however, we do see that Hill overperformed Obama by about 5 points in the precincts where Obama split the vote 50/50 with Romney in 2012, as well as a slightly better performance in the precincts Obama won: 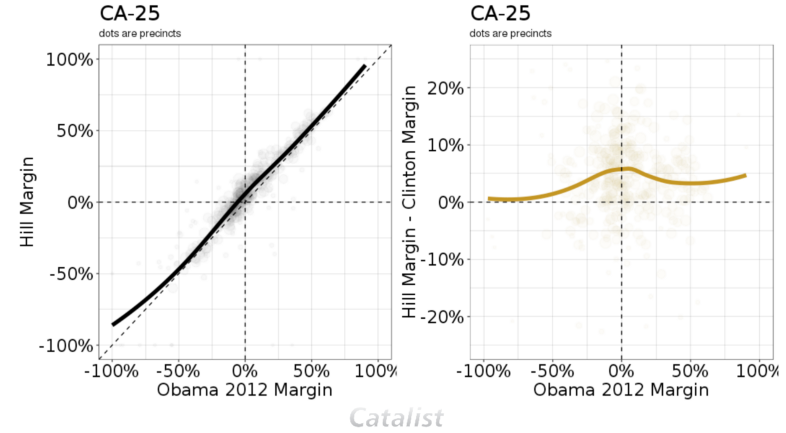 So, with those considerations in mind, what did make the difference in 2018 for Hill? Which groups provided her those additional votes where she overperformed relative to Obama?

While both Clinton and Hill demonstrated about a 9 percentage point improvement over Obama in this district among Republicans, Hill garnered 4 additional points in support among Modeled Historical Middle voters compared to Clinton, and also performed 4 percentage points better among Democrats:

And the real story is that this improvement among Historical Middle and Historical Republican voters came from the women within those groups:

Interestingly, those gains for Hill and Clinton among women came from different demographic groups. There has been an impressive amount of attention spent detailing Clinton’s lackluster performance among white women, and we see in the chart below that she only improved by 3 percentage points over Obama among white women. However, Clinton improved by 12 points among women of color.

Hill essentially flipped that ratio. She achieved identical gains to Clinton among women voters in this district relative to Obama, but via different demographic groups. Hill improved over Obama by 10 points among white women and by 8 points among women of color:

However the other interesting datapoint evident in this data is the shift in how men voted. There is a 5 point drop in support among men of color in this district for these two white, female candidates, when compared to Obama. Note that this is NOT true for white men. While they were, as is the case nationally, a strong Republican constituency, white men supported Hill by 5 percentage points more than they supported Obama and Clinton. There seems to be significant gender dynamics at play within this district. 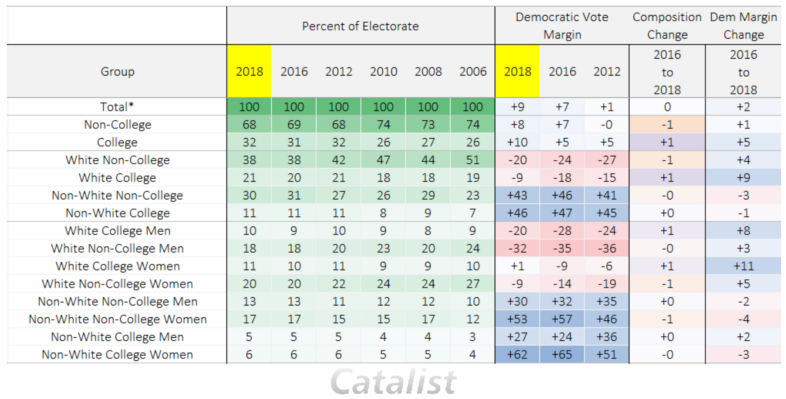 In many districts, the majority of the voters of color tend to be of a single race, and occasionally there may be a second racial group of significant size as well. In this district, however, Asian, African American, and Latinx voters all make up more than 10% of the population.

Looking specifically at the dynamics among women voters, we see evidence of the improvement for both Hill and Clinton among middle aged Asian American and Latina women, as shown n the chart below, representing Hill (in red) and Clinton (in black), respectively, 10 to 15 points above the green line representing Obama’s level of support for these groups. Given the lower margins for Hill and Clinton among men of color compared to Obama and the higher margins among women of color, there seem to be gender dynamics at play within this district: 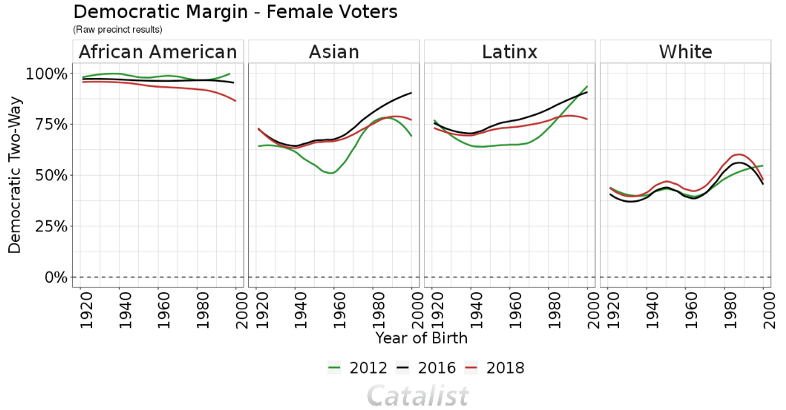 This analysis likely necessitates a follow-up once we have all the official California precinct data from 2018: there are some indicators of loss of support among older men, but the data isn’t yet well powered enough. This analysis was based on post-election survey data, county level election returns, and precinct returns in CA-25 in particular (compared with precinct data nationally when we do Vote Choice History analyses). So do these effects we see here as a function of candidate gender and voter gender exist in other California districts and across years? California likely has a sufficient number of districts and has had enough elections with female candidates at the statewide level that will make this a reasonably powered analysis.

In 2018 Hill put together what appears to be a durable winning coalition for this district, even with the loss in support among various male demographic groups. Additionally, the differences between Obama’s coalition and Hill’s shows us that Hill’s performance in 2018 was not the ceiling for Democrats in this district. There are still more votes available here for Democrats, both at the statewide level and for future congressional elections, to help build additional buffer into Hill’s 6 point victory in 2018.