What Happened in the Iowa Gubernatorial Election? (2018)

Iowa, a state President Obama won twice, has been mostly Republican at the statewide level since 2012.

In 2014, incumbent Republican Governor Terry Branstad won with 59% of the vote and Republican senate candidate Joni Ernst won by 8 percentage points. In 2016, Donald Trump won the state by nearly 9 percentage points over Hillary Clinton, and incumbent Senator Chuck Grassley was re-elected by 25 points. Republicans also flipped the state senate, giving them control of both chambers of the legislature.

Most recently in 2018, Democrat Fred Hubbell ran for governor against incumbent Republican Kim Reynolds, who took office after Governor Branstad was appointed Ambassador to China. Hubbell lost by 3 percentage points, but even so, still performed 6 percentage points better than Clinton.

Ahead of the 2020 Iowa Caucus, Catalist Analytics has identified some of the key factors that drove Hubbell’s improvement in performance compared to other Democratic candidates:

The degree of partisan consolidation (or softness) has not only varied widely in recent Iowa elections but also been a critical element of success for Democratic candidates.

Young voters (those ages 18–29) are often another vital element of the traditionally-Democratic voting coalition. In Iowa in 2018, Hubbell won the group by 15 percentage points, an improvement of 4 points compared to 2016, and a 15 point gain since 2014 in which the group split 50/50. Turnout was also higher among this group than during the midterms of the Obama presidency; voters ages 18–29 were 11 percent of all votes cast in 2018, compared to just 9 percent in 2014.

President Obama won voters who are harder to categorize (i.e., people who are more likely to be Independent voters) across Iowa by huge margins in his consecutive victories. This same group of middle partisans narrowly went for President Trump in 2016. This is in contrast with 2018, when Democrats were able to win back these voters. Hubbell won modeled historical middle partisans by 6 percentage points, a 10 point increase over Clinton and a 16 point improvement since the election of 2014.

The shift in support among this middle partisan group over time is considerable, as visualized in the graph below: 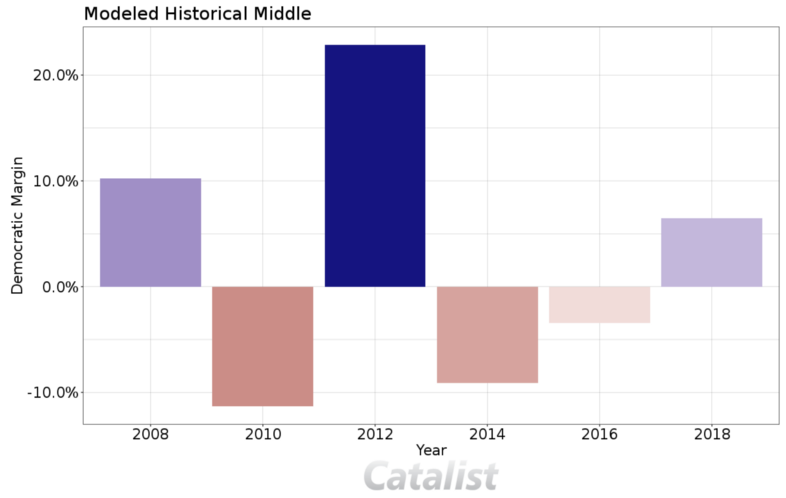 Coupled with their level of support, the modeled historical middle voters were also a larger share of the electorate than in the prior midterm of 2014. Modeled Democrats held steady in terms of share, while modeled historical Republican voters declined in share — the result of which was an R+7 electorate in 2018 (identical to 2016) as opposed to an R+10 midterm electorate as occurred in 2014.

This points to a trend seen across many of Catalist’s state analyses — Democratic gains weren’t necessarily driven by persuading a single key demographic or by boosting turnout among a specific targeted group of voters. In Iowa, as in many states, Hubbell’s improvement over Clinton’s performance is attributable to a combination of several improvements relative to 2016, especially among voters who have historically supported Democrats and middle partisans, while at the same time, historically Republican voters did not show the same degree of enthusiasm as in past midterms. 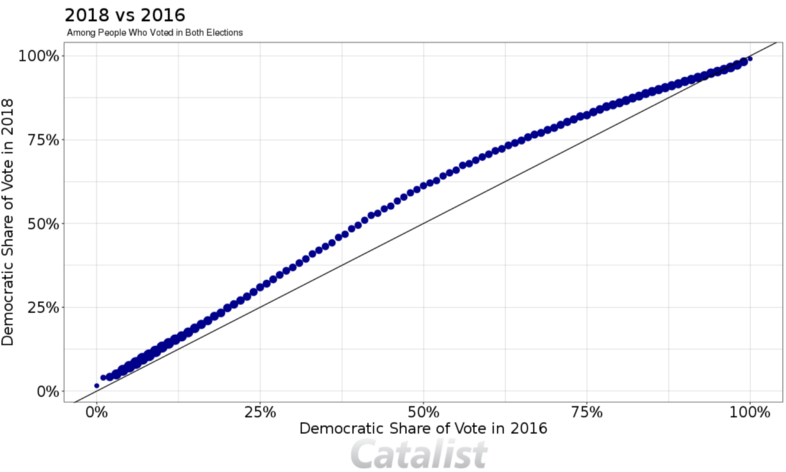 Making up ground with groups of voters that swung Republican since Obama’s victories, including rural voters and voters without college degrees

Rural white voters, who make up 45 percent of the electorate, supported Hubbell at a rate 6 percentage points higher than Clinton. Contrary to many of the prevailing media narratives, Catalist finds no significant difference in partisan swing between rural and suburban voters in this state (Hubbell similarly performed 6 percentage points better than Clinton among suburban White voters). Swings in persuasion among urban Iowans probably did not have a significant impact on the outcome of the election simply because they made up only 3 percent of the electorate. 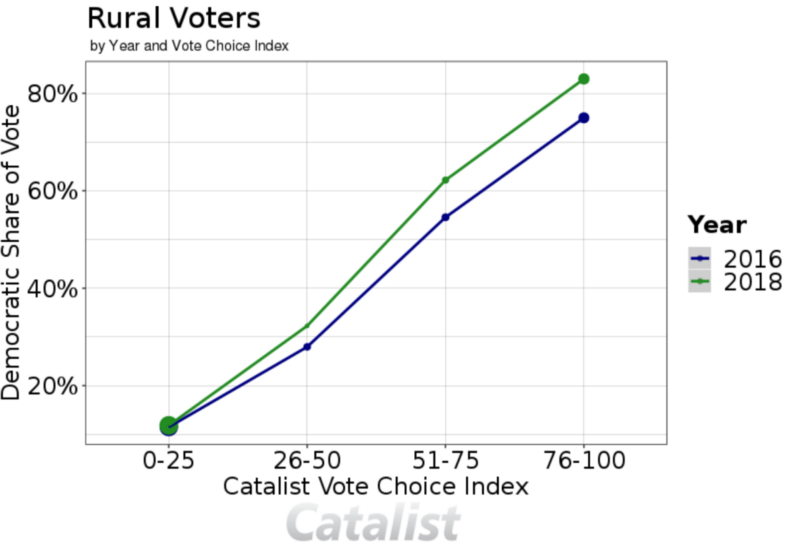 Finally, voters ages 65+ narrowly flipped from Obama in 2008 to Romney in 2012, and subsequently voted for Trump by a 25 point margin in 2016. There was a substantial 12 point swing back towards Democrats in 2018. As 32 percent of all votes cast, closing the gap among this historically-Republican supporting group is critical to future success across the state.

Thanks to Michael Frias.