What Happened in the MI-08 Congressional Election? (2018)

In 2008, Obama won Michigan, including Michigan’s 8th Congressional District, cementing the state’s status as part of the Blue Wall in the midwest. Since then, the 8th CD has consistently voted for Republicans, including Romney in 2012. In his last midterm election in 2014, Republican Mike Bishop won the open seat by a 14 point margin.

In 2018, Elissa Slotkin, a former CIA analyst, defeated Bishop by a 4 point margin, reversing the decline in Democratic performance. The district swung 11 points towards Democrats from the 2016 presidential to the 2018 congressional elections, close to the national swing in the popular vote. How did Slotkin win a seat that was regarded as a Republican stronghold before her candidacy? Is this the Obama coalition coming back together, or something new?

Among suburban whites, who comprise nearly two-thirds of the district, Slotkin nearly replicated Obama’s 2008 margin. Suburban whites swung towards Democrats by 12 points from 2016, and by an impressive 22 points from 2014, when Bishop was running for an open seat against an Ingham County official.

Urban white voters voted for Slotkin by a higher margin than any of the presidential candidates Catalist has modeled support for, but only 3% of 2018 voters live in the few dense, urban areas of MI-08.

Although the composition of the electorate didn’t change with respect to urbanity, there was a slight geographic change in composition. The percentage of the vote that came from Ingham County, the more Democratic-leaning county in the district, increased slightly compared to 2016. In the map below, you can see that the number of votes from the rural areas of Livingston and Oakland Counties decreased, while the number of votes from suburban and exurban areas near Lansing mostly held steady.

The few exceptions are notable. The number of votes from the tracts near Michigan State University is also reflected in 2 point drop in the share of the electorate aged 18–24. Holly is visible as a dark green area that saw an increase in turnout. Holly also happens to be Slotkin’s hometown and the location of her family’s farm. 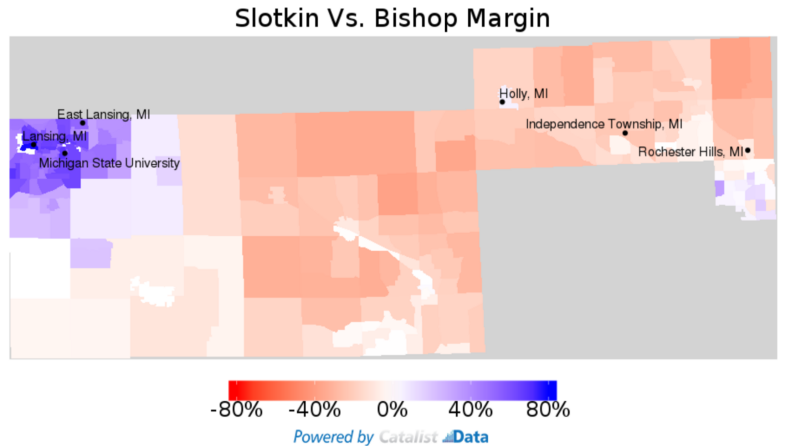 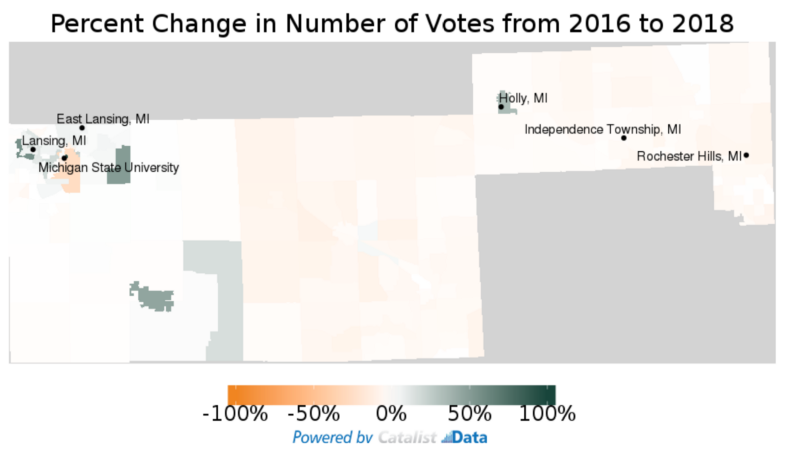 Women voted for Slotkin by a 16 point margin, greater than for any other Democratic candidate for which Catalist has modeled support for in this district. The gender gap in Democratic margin, which reached a new high of 25 points for MI-08 in 2016, stayed the same as women and men swung roughly equally from Trump to Slotkin. The result is that Slotkin performed slightly better than Obama in 2008 among women but much worse than him among men (Obama won 51% of the male vote, resulting in a gender gap of only 10 points). Non-white women, who always vote for Democrats by very high margins but represent a small percentage of the population in this district, did not move at all compared to 2016.

Although Slotkin improved on Clinton’s performance with voters across the partisan spectrum, it is not surprising that modeled historical middle voters seem to have the most elastic preferences.

Among modeled historical Republicans, Slotkin’s results closely resembled both Obama and Clinton’s margins from 2008 and 2016. Among those who usually vote for Democrats, Slotkin appears to have regained some but not all of the Obama-Trump voters. And among the middle, she again performed better than any Democrat for whom we have data, including outperforming Obama’s margin in 2008 by 14 points.

When we examine voters by education, we see evidence of a growing partisan gap between those with a college degree and those without one. Slotkin narrowly lost voters who are not college graduates, matching Obama’s 2012 margin. However, she handily won college-educated voters by 14 points. When Obama won this district, he won non-college voters by an even greater margin than he won college voters. By contrast, in Slotkin’s victory, the gap in Democratic performance between voters of different education levels was even greater than it was in 2016. Although the share of the electorate that has a college degree is increasing, a solid majority of voters are still not college graduates. If Democrats continue to lose voters with a high school diploma or less, they will have to make up ground among college graduates. Slotkin was able to do that.

Slotkin’s results do not closely mirror any of the presidential campaigns. She seems to have assembled her own coalition. Will this coalition hold in 2020, or will Trump’s presence at the top of the ticket cause a reversion to 2016? Or will a different Democratic presidential candidate shake things up once again?