What Happened in the Montana Senate Election? (2018)

The race for Senate in Montana between incumbent Democrat Jon Tester and Republican State Auditor Matt Rosendale was a close contest, closer than Tester’s victory in 2012 but not as close as when he was first elected to the Senate by 3,562 votes in 2006. Tester’s victory continued a trend wherein he, and the past two Democratic governors, have been able to achieve victories despite the partisan lean of the electorate in Presidential and Congressional elections in Montana. 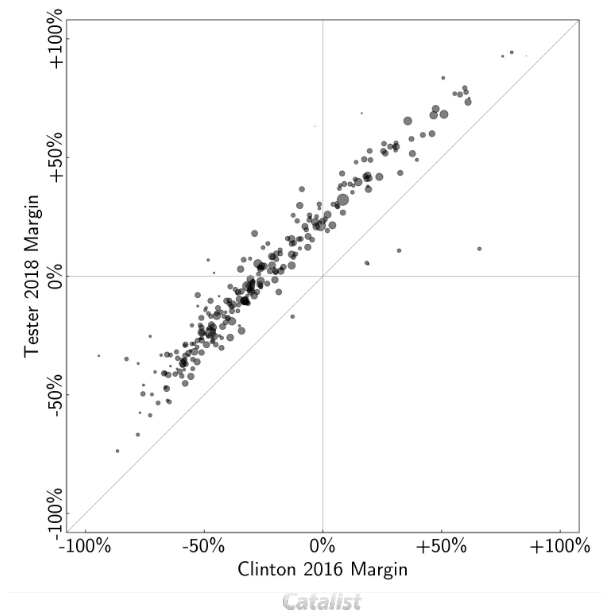 In the big picture, Montana is very unlikely to be a critical state in the outcome of the 2020 Presidential election but there will be another Senate election and a gubernatorial contest in two years as well. Further, Democratic candidates seeking to win in red states that shifted toward Trump in 2016 will be well served to examine Tester’s 2018 path to victory.

How did the Tester campaign maintain his base of support in an environment where many Democratic Senate incumbents lost in states that President Trump won? In this blog post, we’ll cover important trends in the electorate in terms of turnout and support that contributed to Tester’s victory.

According to our post-election projections and analysis, Jon Tester held on to his Senate seat through the following:

Lagging Republican enthusiasm, and the persuasion of Republicans and Independent voters

As was first identified in our national analysis, Republican voters’ share of the electorate sagged in 2018 compared to past midterm elections. In Montana specifically, modeled Republicans accounted for just 39 percent of all votes cast, compared to 46% in 2014 and 41% in 2016. At the same time, among voters who are harder to categorize, i.e., people who are more likely to be Independent, their share of the electorate grew to 33 percent (up from 24 percent in 2014 and 29 percent in 2016). As these middle voters surged, modeled Democrats’ share of the electorate dipped slightly, but not to the degree as was seen among Republicans. Combined, this made for a more favorable partisan environment than in cycles past (R+11 in 2018 vs. R+15 in 2014).

Beyond the makeup of the electorate, Tester successfully outperformed past Democratic candidates among voters who have historically been in the middle, and even cut his deficit among modeled Republican voters as well. We estimate that Tester actually carried middle voters by 18 points, whereas Clinton lost that group by 17 points in 2016 (a net +35 point swing). Among Republicans, Tester lost the group by 64 points, but even that represents a 15 point improvement compared to Clinton in 2016.

Maximizing the support of more traditional elements of the Democratic coalition, including young voters, single voters, and those in urban areas

As with likely Independent voters, younger voters (ages 18–29) too represented a larger share of the 2018 electorate than in the prior midterm– 11 percent of votes cast in 2018 vs. just 8 percent in 2014. Even among those ages 30–44, the share rose to 19 percent (up 2 points vs. 2014). In 2018, Montana voters cast more votes and came very close to turning out at higher rates (as a percentage of the citizen voting eligible population) than was the case in 2016. Our data mirrors these top-level trends; we estimate that older voters still made up a higher share of ballots cast in 2018 compared to 2016, indicative that while turnout reached Presidential levels in the aggregate in Montana, the electorate didn’t quite reach Presidential levels in terms of composition.

Young voters have consistently been a critical element of the Democratic coalition across the country, and they certainly proved to be vital to Tester’s reelection effort as well.

As another vital element of the Democratic coalition, single voters (both women and men) supported Tester by a margin of 20 points in 2018. By comparison, Clinton lost this group by 5 percentage points in 2016. Among single women, in particular, Tester led by 30 points, compared to Clinton’s narrow 5 point lead in 2016. Among single men, the 8 point margin enjoyed by Tester in 2018 was a 25 point improvement from Clinton’s level of support the cycle prior.

As a final element of the Democratic base, urban and suburban voters also contributed to Tester’s victory. Urban voters, while a very small share of the Montana electorate (just 3 percent of votes cast), supported Tester by a margin of 44 points, while suburban voters (45 percent of votes cast), supported a Democrat for the first time in recent elections by a positive margin (18 points). We’ll discuss rural voters in the next section.

Mitigating historical deficits with more challenging audiences, including voters without a college degree and voters in rural communities

As Democratic candidates in rural, red states know all too well, victory often requires more than just maximizing support and turnout from the Democratic base, but often relies on significant inroads to more challenging elements of the electorate. This was most certainly true for Tester, as he demonstrated strong support among voters without a college degree, including white non-college voters, as well as those in rural communities. Compared to Clinton, Tester actually made greater gains in vote share among rural voters than among urban or suburban voters. This is consistent with the national pattern we identified in an earlier analysis. Given the significant size of these Republican-leaning groups across Montana, this crossover appeal was a critical element of success. 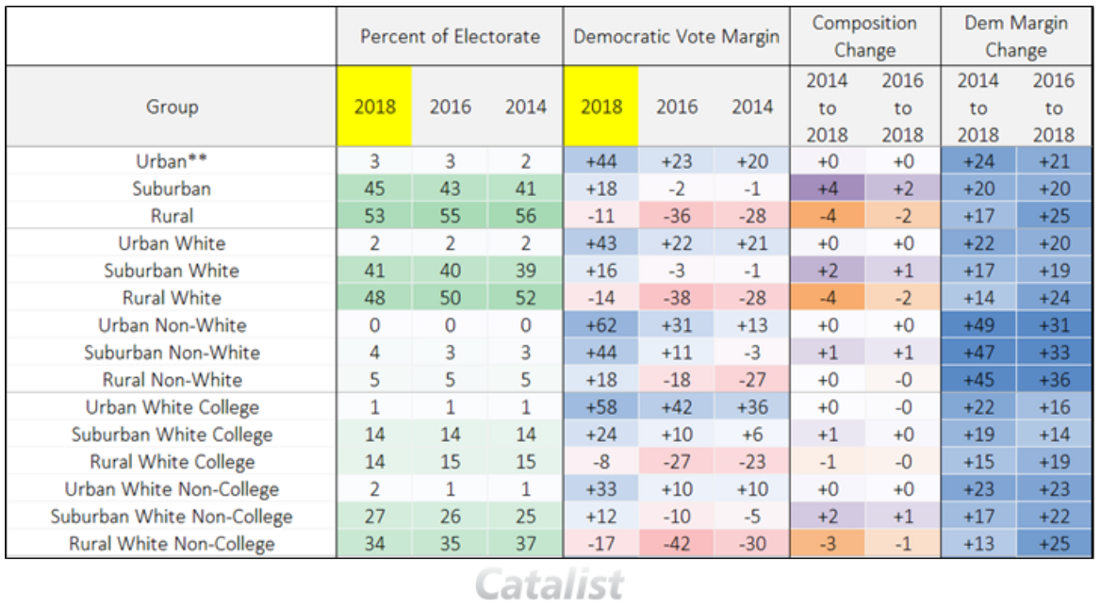