What Happened in the North Dakota Senate Election? (2018)

After narrowly winning with 50.2% of the vote in 2012, Heidi Heitkamp became one of four incumbent Democratic Senators who lost in 2018. Despite the early polling and expected competitiveness of the race, Heitkamp lost decisively with 44.3% of the vote. However, this was not as wide a margin of defeat as seen in the past two presidential elections where Trump and Romney carried the state with 67.9% and 59.8% of the votes. In examining the differences between Heitkamp’s recent loss and prior elections, there are three key trends that merit discussion:

Importantly, these trends hold when we look at only those voters who cast ballots in both 2016 and 2018. For example, among consistent voters, Heitkamp performed 39 percentage points better with single women than Clinton, and 17 percentage points between with married men.

One potential factor consistent with the sizable increase in gender and marital status preference gaps is the unique impact the Brett Kavanaugh nomination to the Supreme Court had on the election in North Dakota. According to a Brennan Center for Justice report on television ad spending around the nomination, an estimated $1,434,720 was spent specifically in North Dakota in support of the nomination. In other words, slightly more than a quarter of all state-specific spending that went towards ad buys from conservative groups was spent in North Dakota.

This ad spending around the Supreme Court is unlikely to have fully caused these vote preference trends. However, the it points at the potential salience of the issue among 2018 North Dakota voters.

Historically, economic conditions have large effects on election outcomes. Before the 2018 midterms, several observers wondered how soybean tariffs and recent growth in the oil, mining, and natural gas industry would alter voters’ decisions. Unlike many states, North Dakota has a sizable share of its economy devoted to both sectors: 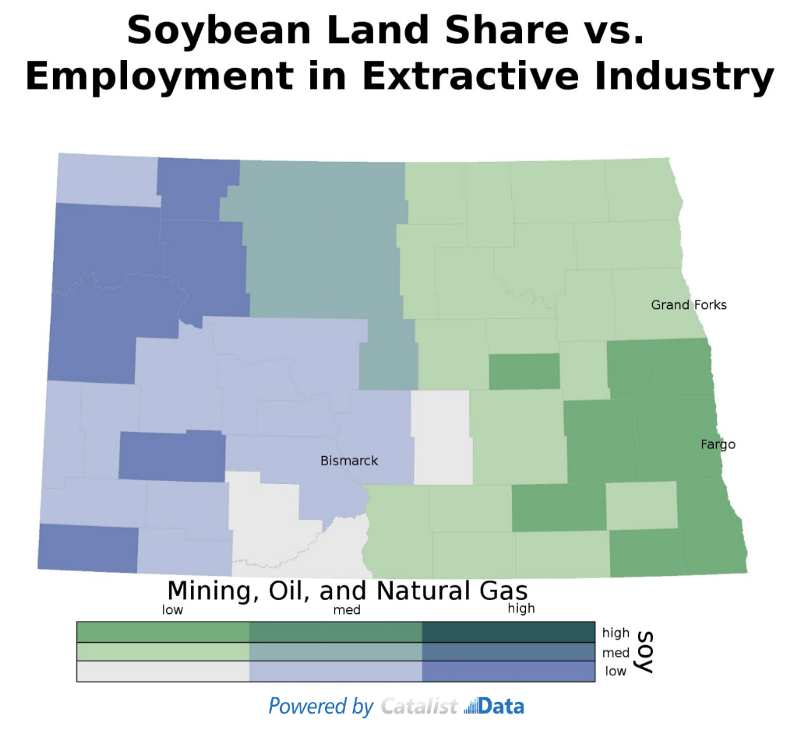 There exists considerable overlap between areas where Heitkamp overperformed both Clinton and Obama and where soybean farming is concentrated.1Specifically, the percent of land, by county, where soybeans were planted in 2017 per the USDA. Additionally areas which she Heitkamp received a lower vote share than Obama are concentrated in areas with above average employment in resource extraction.2Specifically, the percent of the workforce, by county, employed in mining, quarrying, and oil and gas from the 2016 ACS.

These two trends help explain the increased geographical polarization across the state, and hints at the possibility of North Dakota becoming an increasingly Republican stronghold if the resource extraction industry continues to increase its share of the state economy. Importantly, a county’s prevalence of soybean production and its share of employment in resource extraction are predictive of Heitkamp’s overperformance relative to Clinton even at controlling for other potential regional divides like population density.

Looking at the full age distribution shows a similar pattern across years: 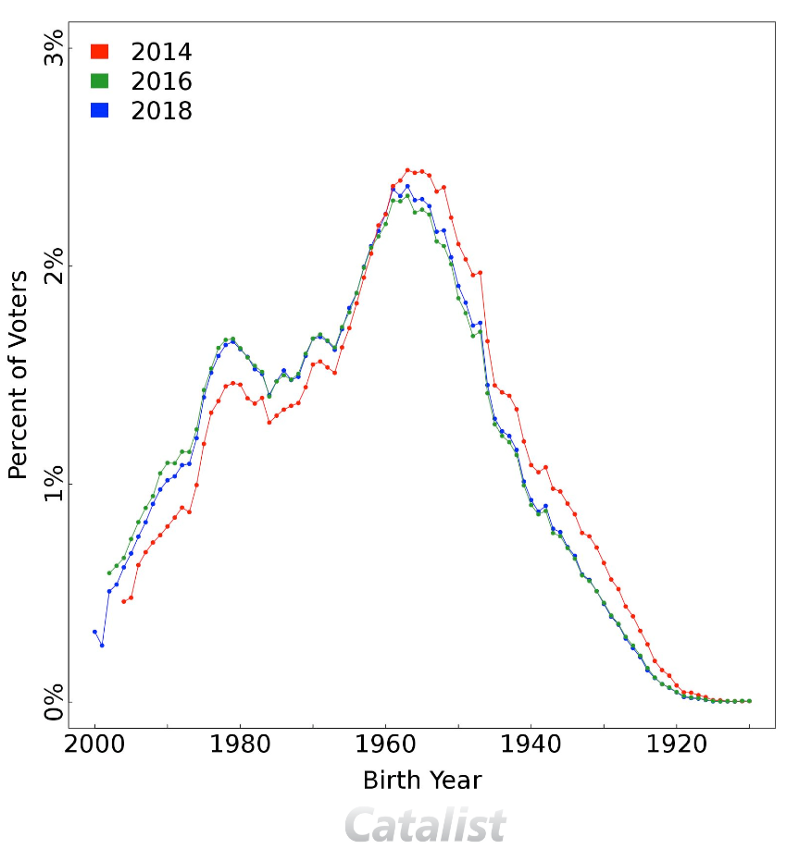