What Happened in the New Hampshire Senate Election? (2018)

New Hampshire is the first state of the series in which the Democratic candidate at the top of the ticket in 2018 won a smaller percentage of the vote than Hillary Clinton did in 2016. Despite preferring Democrats at the presidential and congressional levels, Granite Staters chose to give Republican Chris Sununu a second term as governor. In a year in which Democratic House candidates for NH-01 and NH-02 won by margins of 8 percentage points and 13 percentage points respectively, Molly Kelly, the Democratic candidate for governor, lost by 7 points.

This is not a phenomenon unique to New Hampshire. Sununu stands with Governors Larry Hogan of Maryland, Charlie Baker of Massachusetts, and Phil Scott of Vermont as a popular Republican governor of an eastern state that routinely votes for Democrats at the federal level. Why do these Democrats want white Republican men who talk about fiscal responsibility to sit in the governor’s mansion? Who makes up this large block of split-ticket voters in such a polarized political environment?

If the difference between the gubernatorial vote and the congressional popular vote were simply due to incumbency, we would expect the difference in margins to be greater in NH-02, in which incumbent Democratic Representative Ann McLane Kuster was running for re-election, than in NH-01, which was an open seat. Instead, Democrat Chris Pappas in NH-01 outperformed Kelly in his district by slightly more than Kuster did in NH-02, as shown in the chart below.

The map below shows some regional preferences. Pappas outperformed Kelly most in his home base of Manchester. Kelly came close to Kuster’s margin near Kelly’s former State Senate District in Cheshire County, in the southwest part of the state. 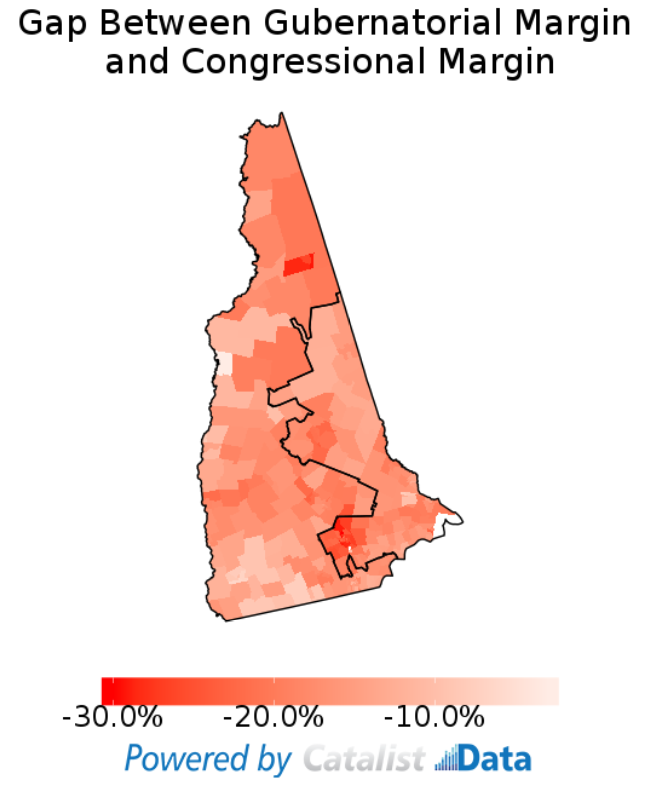 Then who are the Sununu — House Democrat ticket splitting voters?

Single men were particularly likely to be ticket-splitters. Despite Sununu narrowly carrying this group (by 5 points), they voted to send Democrats to congress by 16 points, an even greater margin than they voted for Hillary Clinton in 2016.

New Hampshire congressional Democrats won areas Catalist has classified as urban, suburban, and rural. Although Kelly won the 4% of the electorate that lives in urban areas, she won them by only a 10 point margin, 19 points less than Kuster and Pappas’ combined 29 point margin. Sununu even won Manchester, the largest city in the state. Ticket-splitting was less prevalent in the more rural parts of the state, where the gap between Democratic support in the governor race and the house races was 17 points. 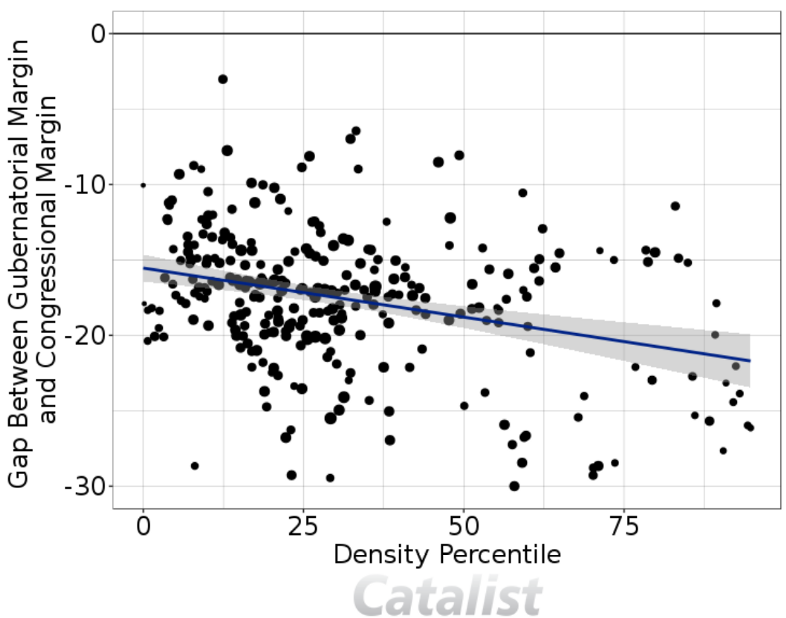 Democratic congressional candidates even won rural areas of the state, in which a plurality of 2018 voters live. Clinton lost rural voters by 3 points.