What Happened in the TX-32 Congressional Election? (2018)

Last November, Democrat Colin Allred defeated 11-term Republican incumbent Pete Sessions with 52% of the vote to Sessions’s 46%. TX-32 is a racially diverse and highly college-educated district located in the northern suburbs of Dallas. The district is a former Republican stronghold which President Obama lost by nearly 16 percentage points in 2012, but Secretary Clinton carried by almost 2 percentage points four years later, when no Democrat even challenged Sessions. As the Sun Belt region of the country rapidly becomes more Democratic, one is left wondering how Allred improved on Obama’s 2012 vote margin by an impressive 24 percentage points?

The age breakdown of the 2018 TX-32 electorate was remarkably similar to that of 2016. We’re able to see from the crosstabs that all six age groups listed below are much closer to 2016 composition than 2014.

Moreover, when we look at the share of the electorate according to birth year instead of election year age the similarity is even stronger: 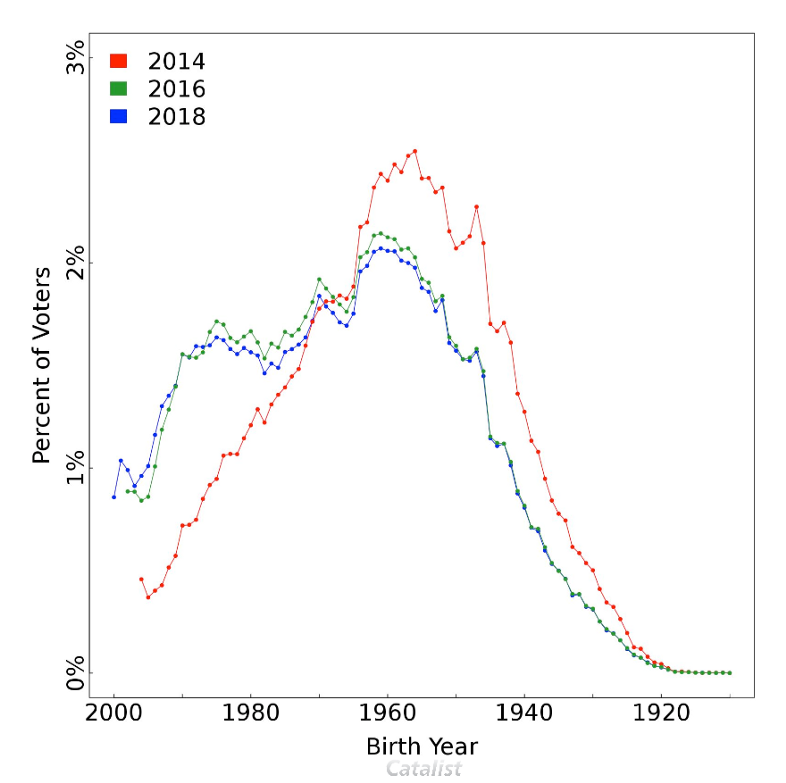 Just as we saw in ME-02 and North Dakota, voters over age 65 grew in their share of the electorate in large part from voters aging into the oldest age bracket this cycle. As the Boomer generation increasingly reaches retirement age this trend will become commonplace.

Additionally, the share of the electorate made up by people of color in this district is all but certain to continue to increase given trends in the citizen voting age population. As Texans born after 1970 make up a larger share of the electorate, this is a district that is in particular likely to lean increasingly Democratic. Particularly, age is a strong predictor of recent Democratic vote preference in TX-32. This pattern holds when looking at either age brackets or birth years. 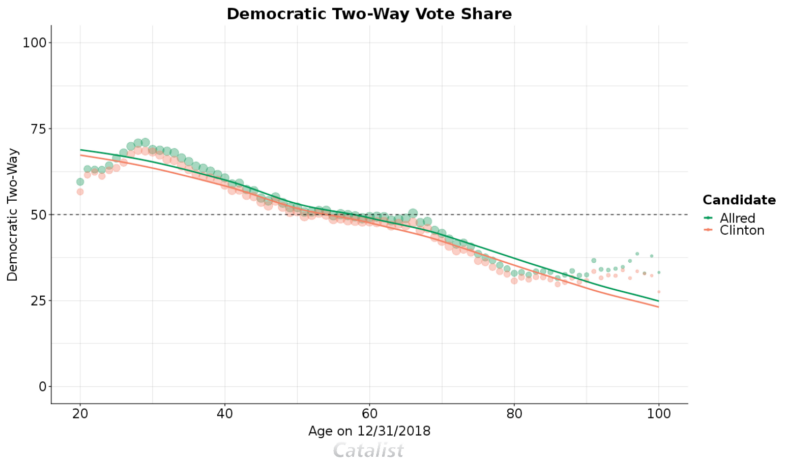 While the 2018 electorate leaned slightly more Democratic than in 2016, Allred was able to perform better than Clinton among middle partisan groups, especially white voters with college degrees and unmarried white voters.

Allred also performed very well among Democratic-leaning groups (e.g. voters of color) who had split their tickets and supported Sessions in previous elections. Part of Allred’s success in 2018 is certainly due to the fact that, while Sessions was a multi-decade incumbent who for example won 31% of African American voters in 2014, Allred was able to bring many of those voters back into the Democratic camp.

In the absence of competitive challengers, it is remarkable how well this longtime incumbent, who voted more conservative than 85% of Representatives during the 115th Congress, performed with the most Democratic leaning groups during his electoral career. 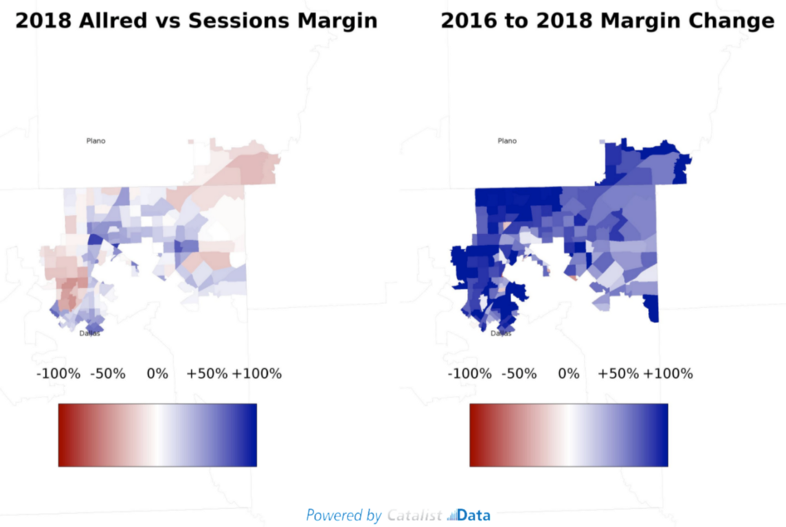 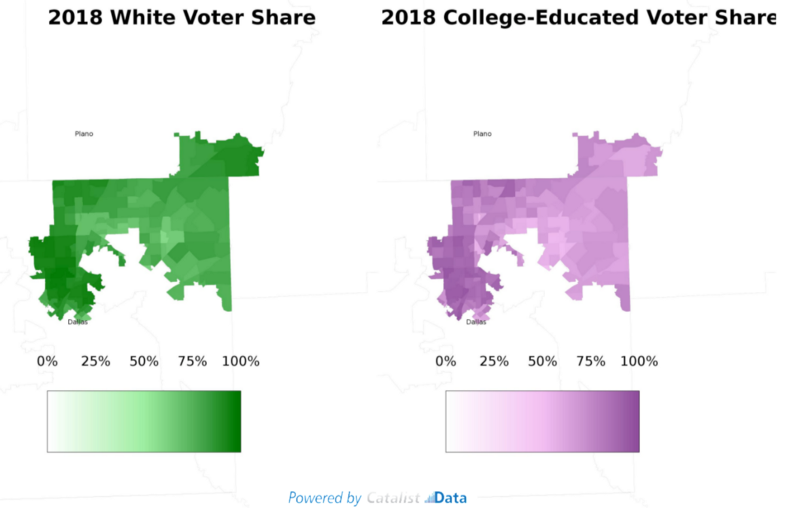 The demographic makeup of the census tract mattered more in predicting where Allred performed better than Clinton rather than location or generation. As long we live in an electoral environment where education is increasingly correlated with Democratic performance among white voters, it will be increasingly difficult for Republicans to win in highly educated suburbs like TX-32.

A Deluge of Early Votes

Because of the popularity of early voting in Dallas County, we could see many of these turnout changes in real time.1During the early vote period, Dallas County (which made up 93% of the TX-32 electorate in 2018) published early vote results, but Collin County did not. In 2018, in-person early voting in Texas occurred from Monday, October 22 to Friday, November 2. In addition, mail ballots were accepted from early September thru election day. By election day more than 70% of the district’s total vote was already counted from these in-person early vote and mail ballots. In fact, early voters leaned noticeably more Democratic than in past elections. Using our post-election estimates of vote preferences, we can show Allred’s performance throughout the early vote period: 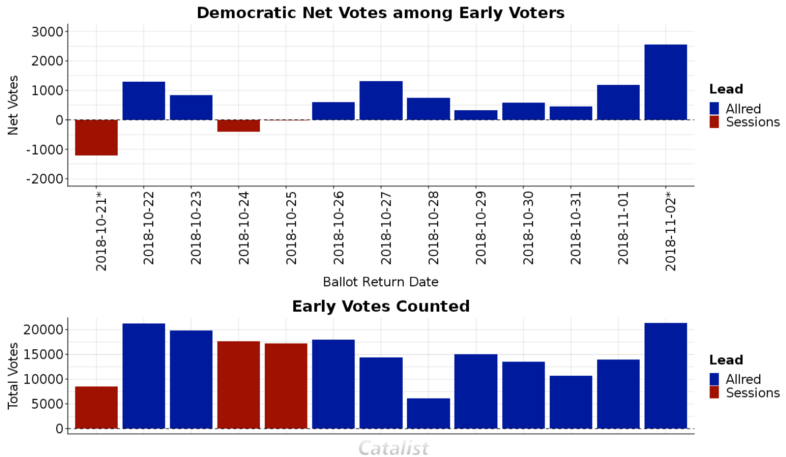 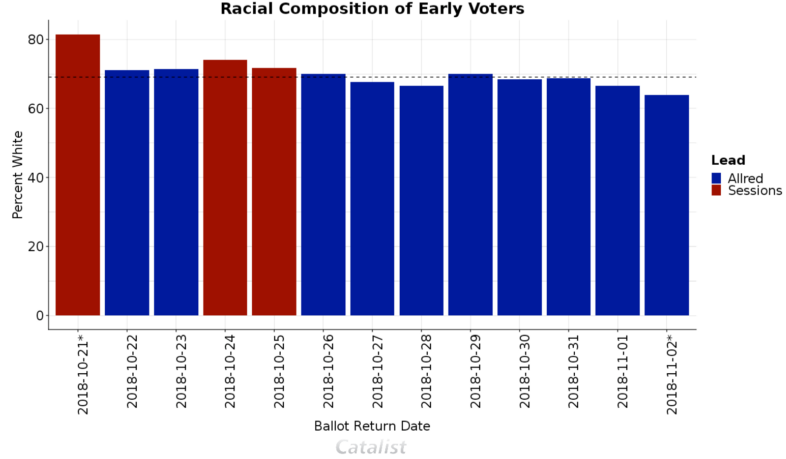 During October, many news stories were written about the long lines at Texan early vote locations. We could tell from the above comparisons that interest in early voting from both habitual and less frequent midterm voters was not only up relative to past trends, but disproportionately increased among Democrats. Such rich early vote data made it possible to predict that Allred was on track to do well in TX-32.